Fidelity Land Title, Ltd. was founded by Donald R. Tully in 1949. 309 S. Main St. has been the home for Fidelity Land Title since 1967, when its founder purchased the former St. Mary’s Episcopal Church in May of that year.

In order to keep up with the ever increasing real estate demands, it became necessary for Fidelity Land Title to expand its operations to accommodate those demands. After many months of planning, 1987 was the year for said expansion of a two-story – 5,000 square foot addition to the existing building. Included in the expansion were additional offices, three additional closing/conference rooms, and an all glass atrium overlooking the city fountain.

With the 21st Century, came additional acquisitions and expansion. The acquisition of one of the oldest Title Companies in Wisconsin expanded our records and tract index now back to 1838 when Wisconsin was still a territory. We are now the only Company to have a complete tract index of Jefferson County.

Another major acquisition, was the purchase of the Historic Andrew Carnegie City Library which has been placed on the “National Register of Historic Places”. The existing Church building & said Library were connected by virtue of a 2 story glass atrium, to create a park-like setting for customers to sit & have their favorite beverage, before they go into their closing.

Other acquisitions included acquiring Title Companies in Juneau, Wisconsin, servicing Dodge County and also the acquisition of another Title Company in West Bend, Wisconsin to service all of Washington County.

With the emergence of the internet and e-commerce, and in conjunction with our Underwriters, Chicago Title and First American Title, we can now offer statewide Title services for your convenience.

Our commitment to quality and service is reflected in our motto:

Visit Us in Downtown Jefferson 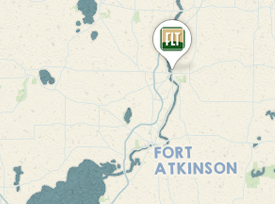